Yesterday, the very kind people at Bandcamp, and in particular the very kind Ari Delaney, included Crystalline in their Best New Ambient list for January! Which is very kind. You can read it all here:

Ari also mentions the vocals, which I thought I'd share a bit more detail on, as I thought it was kinda cool how they came about. They're from my partner, Sophie. She used to play and sing in Her name is Calla, and also does various live bits for people like The Anchoress and Maybeshewill. I wanted to add a few layers to these little ramshackle things I had half-recorded, so instead of making her sing the same few phrases again and again on everything, I invented the Sophie Phone Sample Bank Keyboard™

I recorded her into my phone's voice recorder, singing each note seperately. Here's a screenshot: 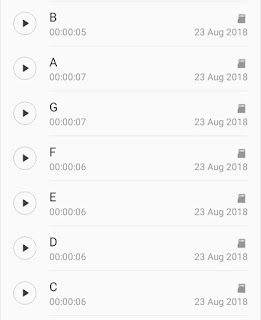 I then did that very hi-tech thing of taking an aux cord out of my phone, popping an adapter on the other end, and then banging it straight into the Catalinbread Echorec pedal I had (it's since died, sadly) and had a few run throughs to see which notes fit the key of the song, then pressed record and played the phone voice recorder like it was a keyboard, and messed with the delay settings as it was all flowing through. Good, eh?

Anyway, thanks again to Ari and Bandcamp for being so kind.
Posted by worriedaboutsatan at 4:17 AM