A bit on socials

A few weeks ago, my football team played a game that was so unbelievably bad, that I immediately swore off football for the foreseeable. I sat down and muttered "right, I'm done" and logged into twitter. I unfollowed the team, the players I was following, the accounts that I liked who talked football, everything. I'd had it. After that, the team had another game the following Friday. I was on holiday at the time (in Scotland - very nice it was too), and thought to myself that if I log in and see this game unfold, on literally the first day of this 3 day break, I'll be bloody miserable. It'll make me angry, sad, and it'll fuck up my holiday. So, with all my might, I stayed off twitter. After the match, and then the holiday, I just kept it up - I didn't want to know the score, or how badly the game went, even when I was back home. Once I'd done a day or so of staying off it, it was easy to just keep off it. So I did.

I'd logged off and not come back in for like 2 weeks - only occasionally popping in for some band related admin to do, but not sticking around. I didn't post, didn't look at the trending topics, nothing. And it felt good. Really, really good. I mean, I'm not naive - I know part of my job as a musician now (sadly) revolves around cesspits like twitter, and trying to get the best out of it, but for that brief period, it just felt nice. No screencaps of the Jeremy Vine show talking about whatever he and his cabal of gammon faced lunatics whinge on about day to day, no Daily Mail headlines, no snarky bullshit from dead-behind-the-eyes irony accounts, no nothing. I missed so many culture war flashpoints that when I logged back in, I couldn't believe people were seriously mad at fucking Big Bird, or a bridge, or whatever it was that had people frothing at the mouth. What a load of bollocks.

But, then, sadly, came the realisation: the music 'biz', no matter how small my little part of it is, still requires me to be there. It's just a fact of life now. I'm old enough to remember life in the biz before twitter, before facebook, spotify, etc. It wasn't much better tbh, but at least didn't require you to strap yourself to a seething, toxic messageboard 24/7. I guess that's the pay-off for having things a little easier these days.

Yet for all the talk of 'democratizing the industry' - yes, it's easy to just release on Bandcamp yourself - the cogs of the biz still prefer everything the old fashioned way - release schedules, booking agents, crunching numbers, etc. etc. plus ca change.

If you want to aim a bit higher than self-releasing CD-rs, or spending ungodly amounts on vinyl pressing from your own back pocket and then trying to shift copies any way you can, then you have to play the game a little - followers, plays, clicks, buzz - it's all still looked at, and you're still judged by it. Now all the blogs have died off, trying to get any kind of press attention for anything is akin to a Battle Royale style fight to the death - you've no chance of getting the serious heavy hitters like Pitchfork (which makes it even more strange that satan did indeed get a p4k review in 2009), so you have to scrabble for anything - and does it matter? Sort of, maybe, I don't know? I suppose you have to try something.

I remember an old manager of a band I was in once who said that a booking agent wouldn't look at us unless we had 10k fans on Facebook. I knew it was bollocks, even then, but I realised that's what you're dealing with - these people are obsessed with this stuff. It's not enough that you make the music, and you tour it, and do everything else, we've now also got to come up with a way of getting TEN THOUSAND people to sign up to our stupid FB page.

Socials aren't neccesarily bad, it's just our way of using them has devolved into such a mess that I don't know how anyone does it for a living. I'm not exactly a massive name, but I have my little corner of the biz and I'm happy to have it. I understand people will want to interact, and they understand I'll have to spam new records, new tours, etc. and that's fine. But sometimes you just have to cut this stuff out of your life and do something, literally anything, else.

Posted by worriedaboutsatan at 4:41 AM No comments:

Not to sound too much like a myspace blog or a livejournal entry from 2004, but a strange thing happened to me today... I went for a quick look at the CDs in my local charity shop, and came across this: 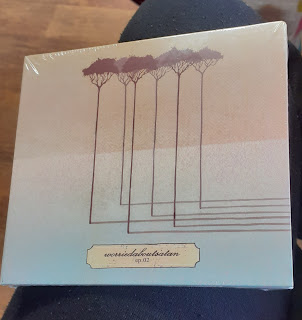 Which is weird, as I've not seen a copy of this for a long, long, loooong time, let alone one in such good condition! Anyway, I bought it (obviously) and I'll add it to the merch desk for next year's tour.

It's all very odd.

Those CDs were great btw - 3 panel digifile, artwork on both sides by Cam Steward, and a professionally duplicated CD to boot. Doesn't sound like much in 2021, but back in 2007 it was a pretty cool thing to have, especially for a band that didn't have anything like a label or a manager, etc.

It was our first foray into pressing something up properly, as EP1 was just a digital download (although I did press up handmade CDr versions of it to give away at gigs), but I think it came out looking really pretty nice. Back in those days, there wasn't a Bandcamp, or Soundcloud or Spotify, so physical pressings were what you did a lot of - I think we got a few hundred of these IIRC, which looking back was probably too many, but you could barely get on the few digital stores there were at the time, so a lot of people just gave away their mp3s via netlabels or p2p sharing sites, and sold CDs at gigs, or by having a Paypal donate button with the price listed next to it haha!

Anyway, if I discover any more old back catalogue CDs in local charity shops, I'll add them to the merch desk too ;)

Posted by worriedaboutsatan at 9:13 AM No comments: