I've written before about how I came up with a name as stupid as worriedaboutsatan for a band, but weirdly not on this blog, so I thought I'd take a bit of your sweet, precious time, and recollect how a young me thought that using a handle from a message board for a band name would be a cracking idea.

Well, wikipedia is correct when it says it's pinched from a song title - and an obscure one at that - but it's sort of half the 'story' behind it.

Y'see, back in the olden days, there were these things called message boards. You don't get them much anymore, as everyone's on twitter and facebook and all that. Anyway, in the before times, I'd go on the board for one of my favourite bands: Belgium's very own dEUS. I'd been a fan for years, after randomly catching their 1999 opus Instant Street on MTV2. The album that's from btw, The Ideal Crash, is one of my favourite albums of all time, but enough about that.

They'd not done a record in absolutely ages (it'd take 6 between The Ideal Crash and Pocket Revolution), so there was a whole bunch of us just chatting rubbish on these boards, but before I joined up, I needed a name which screamed 'I KNOW THIS BAND BETTER THAN YOU', so I went rifling through my old singles and EPs, and there it was, track 3 from the Theme From Turnpike single: 'Worried About Satan'. 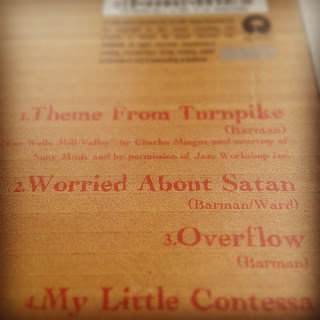 You've no idea how close I came to naming myself, and therefore the band, 'My Little Contessa', but satan moves in mysterious ways eh? The early internet being as it was, you couldn't have spaces without doing underscores, so I rammed all the words together (this fit with the post-rock style of the time too) and became worriedaboutsatan on the dEUS.be forum.

I'd not actually planned on using the name for the band, which was at that point just an off-shoot of my bedroom noodlings, but the forum were putting together a covers CD of old dEUS songs, so I obliged, but couldn't think of anything else to call it. I was in a band at the time anyway, and this was just a bit of fun, so I thought 'ah fuck it' and the first satan track was born.

I'd had some other doodles and college projects lying around too, so I decided to bundle it all together and call it EP1 by worriedaboutsatan. The band I was in eventually split up, so just decided to keep on with the satan stuff and see how far it went.

Anyway, there you go - I hope this clears up that I'm not ultra religious, or a satanist, or anything like that. Just an edgelord kid on the internet who's silly idea stuck for the past 15 years :)

Posted by worriedaboutsatan at 6:29 AM No comments:

Here you go, have a few albums that I enjoyed from the past 12 months. Some great stuff out this year, but I think I probably spent most of it catching up with older albums, and replacing stuff I lost as my old faithful hard drive died :( anyway, here you go, in no particular order- get yr headphones on:

Falconetti - A History Of Skyscrapers

Zelienople - Hold You Up

Hooks Arthur - What You Know May...

Troye Sivan - In A Dream