Yes, I've been a bit slack updating this, but I kinda figured that you'd all know about albums coming out and all the stuff from other places, and I don't really want this little space of the satan-web being overrun by endless announcements. I like just chatting on, to be honest.

That said, I suppose I am going to have to do a roundup of Providence's greatest hits, just because it's nice to keep track of stuff, and you also might have missed them.

OK, so first off, here's Providence:

To go with it, why not read this interview I did with J Hubner over at Complex Distractions. It was a really nice chat, and we got into some real nitty gritty stuff about me, the band, the album and all sorts. It's good!

If you were interested in the making of the record btw, there's a cool little track-by-track guide thing I did for I Heart Noise here.

There were nice reviews about the album from Birthday Cake for Breakfast, the aforementioned Complex Distractions, a great write up by Ron over at Textura, and also Chris Nosnibor's Aural Aggravation - he's always so good at writing about satan.

Oh, and the only other thing that happened was that silly Robert Fripp video... I went on one of those celebrity video message sites and paid him £80 to basically say how fucking class I am. I uploaded it, thinking it'd give you lot a giggle, but ended up going sort-of viral:

As previously mentioned, my PR budget for this up-coming album was next to nothing, so instead of working hard and doing things the right way, I went on one of those video message websites and spent £80 on getting King Crimson's Robert Fripp to just tell me I'm ace pic.twitter.com/g4d9xLfDgA

So yes, that was all good wasn't it? Glad to finally have an album out there now. Speaking of, there are going to be quite a lot of those this year, and I'm gearing up for sort-of-album number 2 of 2021, Circles I. It's... quite an interesting thing, but I'll talk more about it later. For now, here's what it looks like. It'll be out on Shimmering Moods next Friday, and you can pre-order it now. 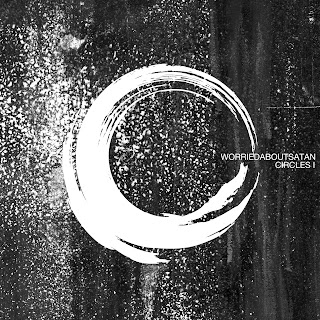 Posted by worriedaboutsatan at 5:56 AM No comments: