Just wanted to mention the artwork to Crystalline a little bit. 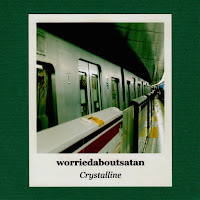 It's by a friend of mine called Ali Safavi, who I met whilst on tour with Maybeshewill all the way back in 2008. We'd set off on a little 5 date tour around England, and by the time we reached Derby (which had a toilet directly next to the stage, so you had to watch people on the way for a piss whilst playing), the MSW guys had a plan to crash at Ali's house.

So we did, and he was a very lovely chap, and as you do with lovely chaps- we stayed in touch. Years went by, and we'd see him now and again popping up at a gig, or just chatting online, and then he went and moved all the way to South Korea.

We stayed in touch via Instagram, which is where I saw his pictures, and thought how amazing they'd be as an album cover. I spied one of a neon sign, which he took in Tokyo, which was the original cover to the album. The label though, thought that if we didn't know what the sign said, we might be inadvertantly advertising something, or pushing something sinister... but by the time I'd found out that the sign was nothing more than a big billboard saying 'Play Pachinko here!', the label and I got a bit mixed up, and ended up using another one of Ali's shots, of the Tokyo subway train. Not a bad thing though, as that's an awesome photo too.

But anyway, I digress: he's a great guy, and his photos are all absolutely wonderful. Go follow Ali on Insta here: https://www.instagram.com/safvli

Posted by worriedaboutsatan at 4:45 AM