I randomly remembered another pretty funny war story yesterday, so thought I'd share.

This one was at, IIRC, a pretty big gig for satan - a launch maybe, or at the very least, a big gig in front of a lot of the band's friends and peers. It had started badly anyway, with the line-up being out of satan's control and having to shunt a friend of ours off the line-up in favour of this other band, who didn't exactly fit our sound at that point. We didn't really know them either, so it just made things a little awkward.

Anyway, on the night of the gig, they start playing and it's all very inoffensive folksy post-rock sort of stuff, and people seem to be ok with it, but as it goes on, the energy sort of goes out of the room - this was Arrivals-era satan, and it was all clicks and micro-techno with huge atmospheric guitar stuff, and here we all were, checking watches and going to the bar for a pint. I stayed in the room and watched the whole thing, as I was a bit antsy and also thought it rude not to - they were here as guests of ours after all.

After what felt like an eternity, the band ask the promoter if they can play another - I'd checked the time, and it was getting really tight, even with our customary very quick turnover between bands, so assumed the promoter would say no, but to mine (and everyone else's) surprise, he gave the go ahead for another TWO songs. This almost had them cracking on for an hour's set, at a gig that was supposed to be a celebration of our music. In the end, I think we had to cut our set short and managed about 30 minutes before the venue came up to turn the lights off.

Just before they launched into their encore however, the bass player went down in satan legend as he got on the mic and started talking about how much he liked the Leeds scene at the time. We thought 'finally! some recognition!' and as he waxed lyrical about every other band in the city apart from us, he dedicated the last two songs of the night to his favourite Leeds band... Bilge Pump. Our faces were a picture. Imagine being invited to play a band's big hometown show, only to turn up, insult them and then praise another band, who weren't even there. Absolutely superb.

Posted by worriedaboutsatan at 5:08 AM No comments:

For the first time since early 2019, there'll be a satan show in your town this March. Well, only if you live in Shipley, Leeds, Glasgow or London anyway.

Yes, I'm hitting the road for a few shows, and all being well, it should prove to be a lot of fun. It'll be the first time you've ever seen satan as just me, so the sound and general look of the thing will be pretty different to what you've seen in tours gone by. Obviously, with the onstage headcount being halved since last time, I'm having to do everything myself, and I've had to work out how to translate bits of the satan catalogue into a live setting. It's not been easy lol.

Shipley is a free show, so there aren't any tickets for that.

There's no laptop, no fancy visuals, just me and a bunch of pedals, surrounded by little boxes.

Obviously, I'm hoping I won't have to cancel these gigs, so if we could all be vaxxed as much as possible, that'd be class. Get your mask on and let's all be sensible about it all so we can all have some safe fun. 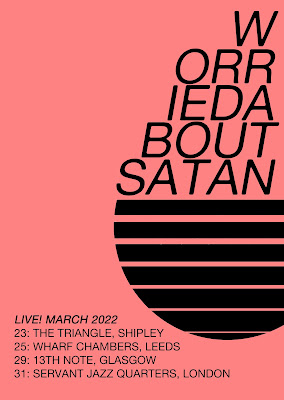 Posted by worriedaboutsatan at 6:54 AM No comments: