Halsey - If I Can't Have Love, I Want Power

Yvette - How the Garden Grows

Also, my favourite music video of the year:

And the award for 'definitely not a very good album, but good to have you back anyway' goes to:

Posted by worriedaboutsatan at 3:02 AM No comments:

There's a new album of mine on the horizon, so it's got me thinking about how to try and make the release of it a success. Very much easier said than done, especially these days, but I wondered out loud this morning - well, what can you do?

Back in the old days of the band, there'd be humongous free-for-all when you put something out - journalists, blogs, websites, writers, magazines- they were all there and they were all fairly approachable. It's how satan used to end up on stuff like Perrier's website, or doing instores for Umbro. Random, made no sense, but we weren't complaining. Coverage is coverage!

Now though, and perhaps this is my age speaking, it's a lot less likely that something I make will get any kind of coverage at all, let alone the type of mad shit you used to wangle. Lots of reasons why this is to be honest - the death of blogging, the rise of streaming, me just getting older and all my journo friends growing up and being adults, etc.

So, it's with this in mind, that I wanted to consolidate and focus on what I do have, and that's a fairly healthy Bandcamp following. Instead of trying to get their editorial team to listen to anything I've made for like the 5,000th time, I thought 'well, why am I trying to get their attention? I already have people here'. So I've sort of decided to focus on that.

It would also help me to be a little more prolific with stuff, as I could just release music quickly and easily, without having to rely on label schedules and pressing plant delays. Where I’m at personally these days, I like the idea of being able to release things as quickly as I make them. I can only really do that if I have you guys all in one place to get news to you easily enough.

I don't message loads, and when I do, I try to make it as entertaining as possible, so you won't end up with 17,000 emails from me screaming at you to buy my stuff, but it is probably the best way to keep in touch with new releases, tours, discount codes, freebies, etc.  Sort of like a patreon/ subscription thing, but one you don't have to pay for. Just come join the team. 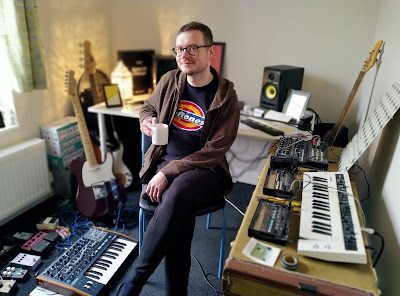 Posted by worriedaboutsatan at 7:38 AM No comments:

As I don't think any more satan is coming out this year, although various labels still have various things of mine in various pipelines, I don't think they'll be seeing the light of day before the end of December. It's the annual 'satan clears his schedule for the end of the year, but nothing happens' curse that afflicted me last year too. Oh well. Sometimes these things can't be helped.

Anyway, here's a big ol' list of the records and remixes I had out this year:

An Tiaracht (track, taken from a split with Charlie Coxedge on This Is It Forever) [here]

You Care Because I Do (track, taken from the end of year compilation on This Is It Forever) [here]

Christina Giannone - Telepathy (Past Inside The Present) [here]

Posted by worriedaboutsatan at 2:52 AM No comments: