Can't get you out of my head

Adam Curtis is back!

You may remember him from such films as Hypernormalisation, and The Contrabulous Fabtraption of Professor Horatio Hufnagel. OK, maybe not the last one, but definitely the first one.

You might also be aware of the connection between his films and my music, as it's appeared in a lot of them since about 2014. His last outing, Hypernormalisation, even managed to get me a credit at the end of the film, which was very nice.

Anyway, after a long break, he's back with 6 (count em) new films, all under the title 'Can't Get You Out Of My Head'. I've seen the first two, as I'm resisting the urge to binge them all and just let them sit in my head for a few days before going back in, and I was a) delighted to be delving into the murky world of Curtisism again, and b) nicely surprised that some of my music popped up during various segments.

Now, you might be thinking 'Gavin, why don't you know in advance what he's putting in?' and to that, I'd say: 'well, he makes everything himself, and is no doubt still editing it all about 5 minutes before he sends them to the BBC, so has neither the time nor the energy to submit cue sheets. Plus, he layers different tracks together a lot, so would be a nightmare trying to unpick it all'. So there. Plus it's kinda cool that he collages so much stuff together that he probably forgets what he's used and where. And he's busy. Always busy.

ANYWAY. I thought I'd keep a handy list here as to what stuff he's used of mine in the docs, as it's just nice isn't it? I wrote a sort-of passive aggressive tweet once about the time when loads of satan stuff got used on Hypernormalisation, and I thought labels and agents would batter down my door asking to work with me, and the only thing that happened was a dude at a label tried to use me to get Adam's email address so he could just send him all his music instead. So with that in mind, I resolved to always just big myself up, if no-one else was going to do it for me.

UPDATE! Just watched part 3, and whereas it was a bit light on the ol' satan stuff, there was a cheeky bit of this one, slithering into a scene involving an irate American in the suburbs:

UPDATE 2! Blimey, part 4 is tough stuff, eh? Found one or two bits peeking through, which were the intro riff to this-


Oh, and he loves to play the clattering, reverb drenched intro to Evil Dogs too:


UPDATE 3! Yes, nearly at the end now. I don't think anything new popped up, apart from one intro to something that's been buzzing around the whole series so far that I just couldn't place. Turns out it's this, from Revenant:

LAST UPDATE! Finally watched the end episode last night, and whereas there wasn't anything new, there was this in the credits! Lovely: 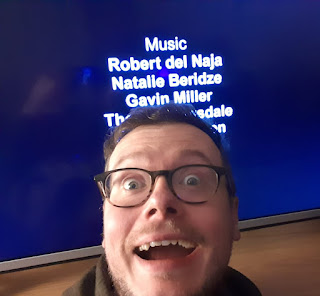 Posted by worriedaboutsatan at 4:58 AM No comments: