the future of satan live

When lockdown hit, it took the one gig I'd had booked in, 2 festival slots I had lined up, and an entire tour I was planning for October. I was, understandably, fairly gutted, but also I was kinda nervous about how this one man satan would operate onstage anyway, so I felt a slight bit of relief and a new found enthusiasm to try something else.

I'd been working on a live set for ages, btw. I'd had it more or less nailed as early as last autumn, and after a few trips to practice rooms to try it out, I felt a lot better about the whole thing than I had previously. It was to be about 6/7 songs long, using loops I'd made and put into my iPad's Garageband looper, over which I'd play my guitar and loop that via various pedals, and out through a small practice amp. Anyone who'd seen us play as a duo will know that I used to channel my guitar through an iPad anyway, so it didn't really present much of a change of pace.

But then, lockdown hit and I lost all my gigs, and then I thought this set might not be very good after all that. I thought that, after a decade of gigs with the two of us going for it onstage, this new look live show with me sat down next to a lava lamp, playing songs mainly on guitar and trying my best to loop hastily thrown together wav files via a fucking iPad suddenly didn't look too hot.

I sort of panicked about it, but meanwhile I'd started these ambient guitar livestream things on Instagram. Just me and a guitar, looping stuff and having fun trying things out. I couldn't get the electronic elements together with the guitar stuff to go into the iPad that was recording me, so I (as I usually do in these situations) decided to roll with the punch and limit myself to just guitar. It sounded nice though, and I liked just noodling. Not done stuff like that in a while, so it was nice.

But then I started thinking, 'well what am I going to do then?' I toyed with the idea of just sacking off gigs altogether, and just doing these livestreams, but I do enjoy touring, and playing for people, so I don't want to lose that. I'm currently working on a new live set, somewhere between the beat driven satan of old, and the more ambient, dreamy satan of now. I'm hoping it'll be ok, and you lot won't mind me sat down next to a lava lamp as opposed to throwing myself around onstage.

Anyway, I usually do about an hour on these livestreams, so I decided to split it into two chunks when it came to recording them for youtube. Part 1 has been up for a while, and is here:

And over the weekend, I finally managed to get a decent recording of the second half of it, which is now up for you to listen to here:


I'm aiming to get the tour back on track for 2021, but will let you know how I get on.
Posted by worriedaboutsatan at 8:07 AM No comments:

If you've ever wondered what goes into a worriedaboutsatan track, well wonder no more. I thought it'd be kinda fun to dive into the studio sessions of a few tunes and explain how I put stuff together. Starting with 'Twin' and 'Step Inside', I'm aiming to make this a bit of a regular thing, as I had quite a bit of fun doing them.

Anyway, the series is up on the satan youtube channel here.

Here's the one for Twin. It's only the demo of it, as it was fleshed out and finished elsewhere on a computer I don't have access to, but it's fun enough:

...and here's the one for Step Inside, which is way more thorough, as it wasn't taken anywhere else for anything:

Any requests for future tracks? Get in touch and I'll see what I can do...!
Posted by worriedaboutsatan at 5:10 AM No comments:

Very happy to announce some more new music from the house-of-satan: 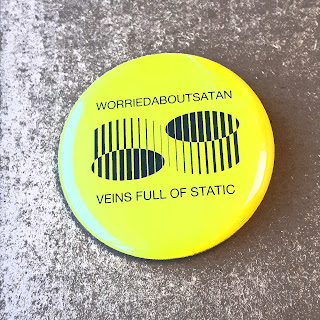 It's a split cassette with my guy Veins Full Of Static, out via my own label This Is It Forever, on July 10th.

It's the fifth split in the series, where I ask someone to join me on maxing out the side of a tape by letting your inhibitions down and getting a bit experimental. So for this one, I went for a really long, Burial style fuzzy late night atmospheric rumbler, and VFOS (or Jamie as he's otherwise known) went down the route of plaintive ambient washes, slowly unfurling over some barely-there beats. It's a monster, and I'm really excited to get this out in the world.

It'll be out on lemon coloured cassette (it's bright, trust me), and with each order you'll get an IRL badge, which is the same as the one on the cover there. Pre-order lands next Friday, and full release is on July 10th.

Any press enquiries, hit up adam [at] tailored-communication [dot] com and he'll sort you out.


Posted by worriedaboutsatan at 4:35 AM No comments:

Thought I'd take a quiet Sunday to record one of these live sets I've been doing as Insta livestreams, and bang it on youtube. I appreciate some don't have Instagram accounts, or would just like to see something in better quality.


It's actually the first 'half' of the semi-improvisational live thing I have going on at the moment. I'll record the second half sometime soon. This stuff wasn't part of the live set I was going to tour with btw, it just kind of happened once I started these livestreams. Technical limitations meant I had to just focus on the guitar, and do away with the electronic elements, which was kinda nice as I didn't think slamming loads of beats and synth through an ipad via Instagram would've sounded anywhere approaching good.

Anyway, hope you enjoy it.
Posted by worriedaboutsatan at 7:17 AM No comments:

On Monday, as promised, I resurrected the livestream stuff. This time though, Insta let me save it all and pop it on IGTV, which I still don't really know how to use properly... anyway, it's all on there now for you to enjoy whenever you like:

PS. the football shirt I'm wearing there is the limited edition Bohemian FC / Amnesty away shirt. It's ace, and is for an obviously good cause.
Posted by worriedaboutsatan at 6:16 AM 1 comment: